One of the Easter dishes, is the Pasqualina quiche. I have cooked it for the first time yesterday. It took a pandemic to make me find time to stop and experiment with a new recipe! I prepared it together with my cousin Amalia, chef and yoga teacher living in Knoxville, with whom we use to meet live on Instagram every Sunday to cook together with all those who want to be with us for an hour.

We have experimented a recipe, although I must say that we both found it very abundant in quantities and a bit long in the procedure. So I propose in addition to the original that we did live, also alternatives suggestions according to my taste. 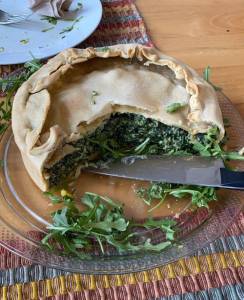 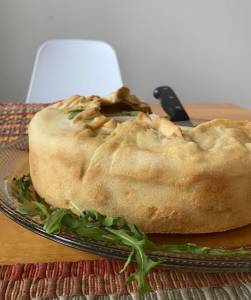 For the dough: I have used a wholemeal flour of ancient grains from Versilia, probably not ideal for this type of preparation, but practically I removed the superfine flour from my kitchen and especially because it is too refined and also because at the stone mill to which I stock up on, they just can’t produce it! Amalia and I used 10% less of the ingredients, in a 22cm high cake tin. We are both in lockdown and unfortunately, we don’t have possibility to share the quiche with 8 people!

The ingredients to make the Pasqualina quiche (for 8 people) are: 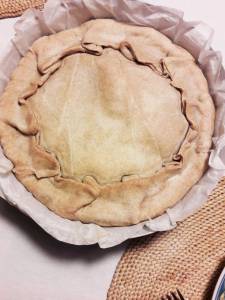 We knead the ingredients well, by hand for at least ten minutes and leave to rest covered while we prepare the filling. With these ingredients, the dough is quite dry and not friable. I advise you to spread it as thin as possible, especially the dough you use to cover the surface of the cake. The procedure involves the drafting of two layers of pasta which overlap each other in puff pastry ways. I must say that I found the whole thing a little exaggerated! I think next time I will add more oil to have a brittle effect (more similar to brisè dough), and I will use only one layer of pasta. As usual I love to edit recipes and go it alone! After all, there are no laws in the kitchen, every family has its own recipe!

Alternatively, my favorite brisé dough, which I now use for every savory pie I make, is composed of:

To obtain enough dough to completely cover the cake, double the dose. Or if you want to try another version of dough you can try the one I propose in this recipe of Camaiore Pepper Pie, with butter. 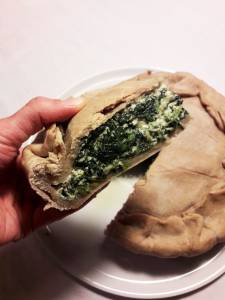 For the filling: Amalia and I used 10% less doses, for a 22cm pan. I have used young chard from my garden which I previously steamed 2 minutes. We put the garlic or onion in a pan to brown, Amalia directly added the fresh spinach and I blanched the chard. We skipped a few minutes until flavored, once ready they leave aside until they cool.

To complete the cake, you also need other eggs to taste to add as a decoration for the filling of the cake.

In the meantime, we have divided the dough into 4 balls, two larger and two smaller. We spread the two larger ones with a rolling pin and put them one on top of the other, with a brush of oil in the middle, on the bottom of the pan. The dough must come out of the edge of the pan.

Once the vegetables have cooled, drain them from the excess water and cut them. Mix with the ricotta, the grated Parmesan, one egg, salt, pepper and nutmeg. Put the filling on the bottom of the cake. The filling must be abundant, in order to create small grooves where we go to insert the eggs that we kept aside for decoration. Break the eggs directly into the furrows, being careful not to break them, add a pinch of salt. 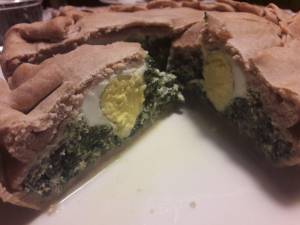 With the other two balls set aside, we have made the cover. Therefore the size of the dough must be about 22cm as the cake pan. Again we brushed with oil between the two sheets before putting them on the cake. Finally we closed the edges of the quiche, decorating the excess dough with small folds, then brushed the surface with oil and put it in the oven for around 40 minutes at 180 ° C.