Old Macdonald Had A Farm…in Tuscany!

For a family of citizens who relocate from Milan to the countryside, the relationship with animals is a special matter. Having an animal in the city helped us feel closer to nature. When we chose to live in Camaiore, in the countryside, we finally had the space to share with other living beings as we had always wanted. Of course not all animals are easy to handle like cats and dogs, and then between misadventures and laughter we have reached some decisions and downsized our dream of the “Old Farm”.

In the city we also have had in two occasions a stray dog in the apartment for the time necessary to look for an owner who could keep it and we have touched all the problems that this entails. The first four-legged friends we adopted in Camaiore were two puppies of mixed blood, male and female: he was all black and she was all brown. Their mother, Diana, black-focata gave birth to them in a deserted ruin next to our court. When he saw that in our yard there was life and movement he took them in his mouth and transferred them there entrusting them to our care after having weaned them. We called them Tom and Gerry and we managed to keep them a couple of years. They were free to come and go as they pleased, but the trouble was that Diana had already used them to eat the meat of wild rabbits that she hunted to feed them and when they were adults they started raiding the house’s chicken coops until someone around, we knew later, no longer tolerated their presence and for them it ended badly. After this episode we spent several years abroad and in Milan without any pets.

When Gaia was 4 years old, Paola decided to buy a cat as pet for her and since then the cats have never missed at home. The first, an European male named Beer, and then the legendary Micia, female black-and-white pseudo-angora with the tail standing up like a flagpole, flanked early by Pepita, a tiger-like European who became crazy about yogurt. From Milan to Camaiore, the transfer to the cats Micia and Pepita was a party. After the first moment of disorientation they circumscribed their territory which, of course, coincided with the extension of our land where our smells were, and began, without complexes, to be respected by the local population of their fellows. Both sterilized them, “world cats”, could not be subjugated by some unsuspecting country and supported each other in the night quarrels that Micia, the most aggressive, indifferently engaged against males and females disrespectful of her law and the boundaries of her territory. Cats, although they return a lot of affection and sometimes even help keeping the rats away, they are mainly a cost and they do very few functions in our small country system. 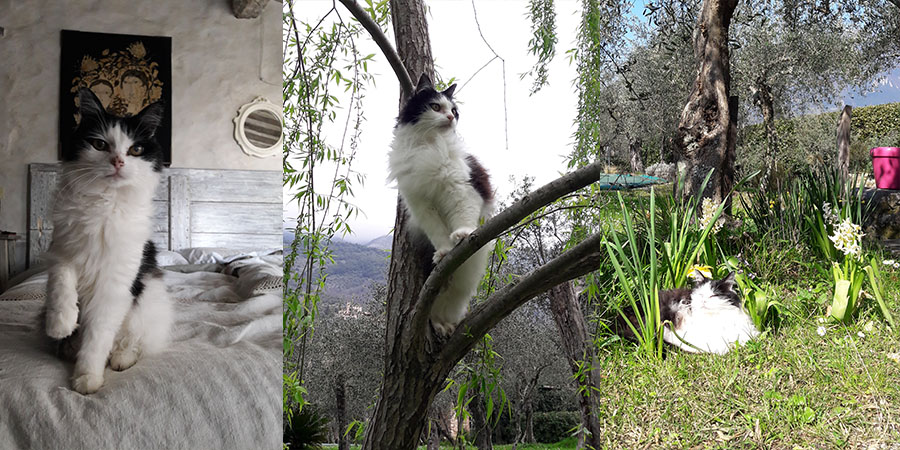 Instead we learned that, according to Permaculture, every component of our system or project should perform at least 3 functions. Will you need to ask yourself what inputs your animals need and what output do they produce? The game is worth the candle? Once you have studied the functional analysis of your animal, you will probably have the answer. So the choice must fall on the right animals: look for example this scheme. The hens perform different functions; it costs relatively little to manage them and is a great resource for work and products. What breed to choose and where to place them? 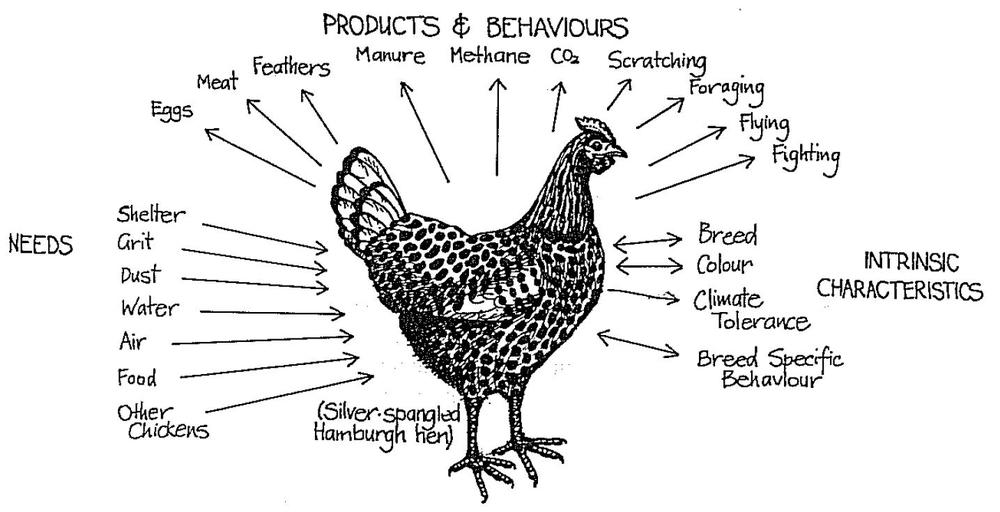 It was Gaia, once she graduated and definitively installed with us at Borgo4case, which has expanded the family of animals. First step the chicken coop to shelter a small group of Livornese hens that have also attracted less “desired” friends. The weasels, the martens and the fox have actually repeatedly slaughtered, until the chicken coop has become an anti-atomic bunker where only a few little mouse still manages to shyly enter the night to steal a grain of maize. After the raids of the wild we cried on the coloured feathers remained on the ground of the quarrel and, determined not to succumb, we ran to buy new hens changing their new names for the respect of the memory of their previous sisters. So after the usual Bianchina, Gray, La Rossa came Sylvie (from the name of the neighbour who gave it to us), Cocca, Mimì and Cocò etc. And then Cedrone the cowardly rooster, a gift from Walter whose grandparents from Lucca have always had the chicken coop in the farm and know that the best eggs are those “gallate”(fertilized eggs). It has surnamed cowardly because it cannot be approached by anyone. Today the situation has stabilized: we have fresh eggs of the day for the whole family and also for travellers and the company of a small group of friendly birds that help us fertilize the vegetable garden, keep the olive grove clean and recycle all residues of the kitchen. 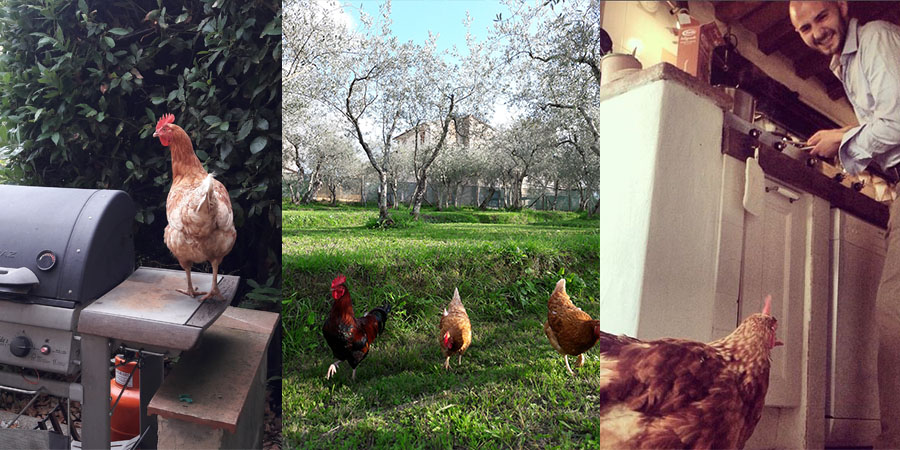 Meanwhile, the size of the vegetable garden had grown and we needed the pond to collect rainwater, as all the Permaculture manuals teach. But the water in the countryside brings mosquitoes, so what does Gaia do? She puts the fishes in the pond and the plants for the phyto-treatment that recall the dragonflies, butterflies and frogs and toads: so a balanced ecosystem was born where the larvae of the mosquitoes serve as nourishment to the fishes, to the frogs and toads, the shrubs and lake plants offer shelter to butterflies and dragonflies and other useful insects and where the bees come to get water.

Ah, I already forgot the bees! They arrived alone when we least expected it. Gaia had already documented, but none of us has ever thought about raising bees in life. And yet one day in late spring a few years ago we were in the field working and we were suddenly attracted by an insistent and very strong buzz. It took a while to follow the noise and discover a swarm of thousands of bees laid on a branch of one of our olive trees to rest, waiting to start again looking for a new home. It was a moment: an instant reaction of all that we discovered beekeepers in pectore. To make a long story short, with the help of expert acquaintances after a few hours the swarm rests quietly in a beehive in our orchard, where today it has been reached by two others produced with the swarms of the first and soon will see a very respectable apiary developed with the collaboration of Walter, an experienced beekeeper, who recently joined our family. Was galeotto the swarm? We do not know, actually today we produce excellent honey all flowers, acacia and chestnut biological thanks to the help of beekeeping Walter Massagli. Do not think that the bees, just because they are insects, will give you less satisfaction than the classic country mammals or birds: in fact, with them you can establish a relationship of collaboration and love and respect and will give you so much satisfaction. So evaluate yourself, but do not be discouraged! 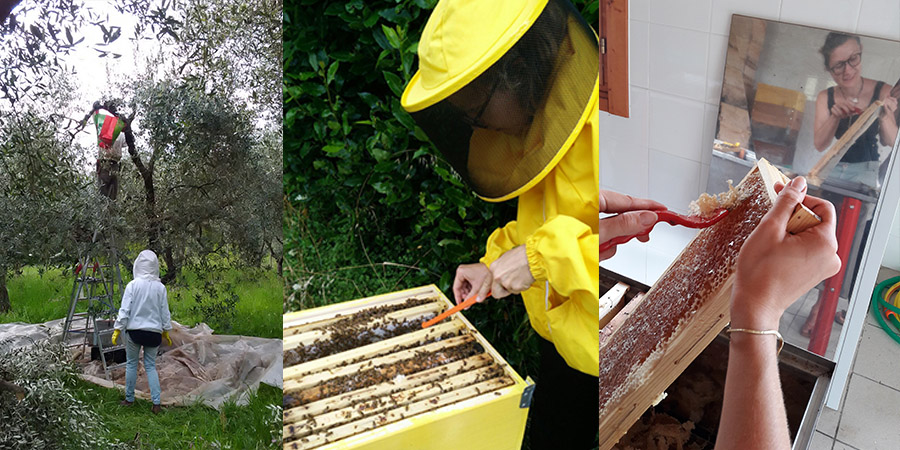 The adventures are not over because the sheep chapter is missing and this was the most adventurous. In fact, it is not easy to pass from citizens to pastors. It all stems from the idea that “instead of cutting the grass we could entrust the work to the sheep” … Good idea, I say. You look for the sheep and in the meantime you buy the poles and fencing the whole property so that you do not let the flock escape. I save you the whole of the bureaucratic procedures (number of stable, transporter, etc.). Once the sheep have been found are picked up and taken home: mother and child. “Daddy is two little sheep, so pretty …” said Gaia, but she was wrong. After a few hours of arrival they had already escaped to the street and to the neighbour’s olive grove. At sunset Gaia was still trying to convince them to come back, attracting them with delicious morsels, and I was with the rope ready to tie them when they approached. No way. When the darkness has come we have given up, disappointed by our lack of preparation and inability to manage the situation. In the morning, very early, we all were looking for sheep, somebody by car to embrace a greater search ray. Fortunately, in a small fraction of the country the news circulate quickly and we learn that the sheep have elected domicile at the stable of a breeder a little higher on the same hill and we go to resume them. However, the cohabitation did not last long: Attila, this is the name that had earned the lamb and I leave you to imagine why, in addition of destroying fences and hummocks had adopted the habit of taking our legs cornered: perhaps in sign of affection? Well, we had to renounce and give it to the farm that has hosted them the first night of escape, where every now and then we go to visit them keeping between us and them a sturdy fence to defend our shins. 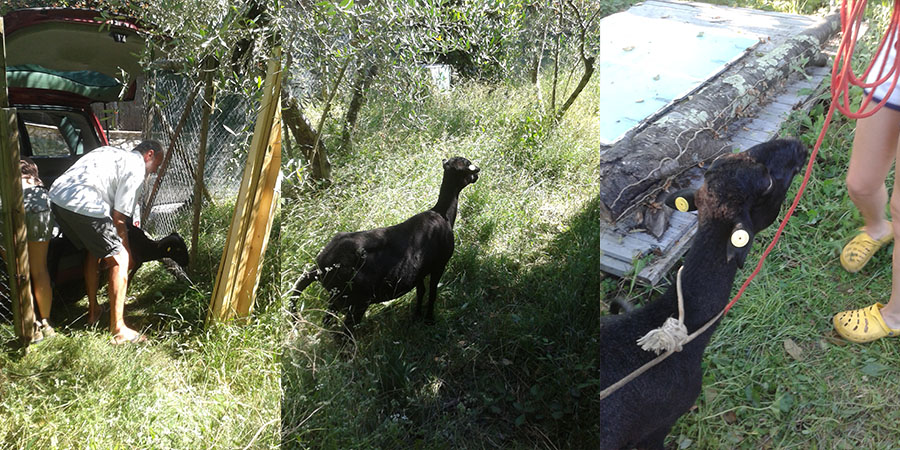 Permaculture teaches that animals in a small country reality can be a great help but, as you could read from our experience, they can also be a great commitment to which often we are not ready, especially when we act as citizens unprepared. I hope I have given you some advice on the tasks you will encounter if you too want to become a shepherd.

Now in the family we are talking about donkeys, geese, ducks and I do not know what else: we will see how the story will develop. And what relationship do you have with “domestic” animals?